Home
General News
Youth’s of akatsi is going through a lot of pain as they lost one of their lovely brother who is shoot by Ghana Police.

Not too long ago we buried one victim ( #Etonam avulekpor) who was brutalized (beating) to death by the akatsi police, after this incident happened, the youth’s was so angry but later cooling down by the chief and the elder of the town, before the burial of avulekpor etornam they also brutalized (beating) one motor biker who is still going to hospital now ……
Yesterday evening, they again crush three youths on a motor bike, claiming they’re suspect of snatching a bag from a women, to hopefully say the Truth, one of the guy is dead named (setor) who was quickly Rush to the hospital after the police crush down them on the motor bike with thier Riot control Van.

Now the west part of this incident now is , the police quickly took the riot van that crush the youth’s down to a mechanic shop immediately after crushing them, but unfortunately for the police, a picture was taking before they repair the riot van as if nothing happens ……

The youth’s was fighting for justice In this incident unfortunately, the police pull a trigger on two youth’s and unfortunately one is dead and one is in a critical condition at akatsi district hospital (kpotarme) …….. 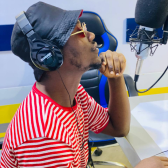 More from this Author

Prince Keddy is a young arising artist and thesame Time a Blogger who is from Aflao but was given birth in Dzodze volta region. Prince Keddy is just a friendly guy to be with.FOR PROMOTION CALL OR WHAT'S APP HIM ON 0248410283